The Anti-Gang Provisions of the SECURE Act 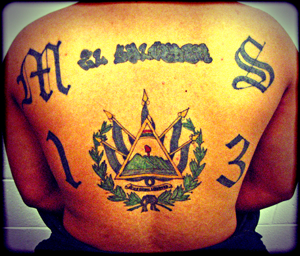 In my last post, I broke down the provisions of Title IV of the SECURE Act, S. 2192. In this post, I will analyze the anti-gang provisions of that bill, most of which are found in section 1511.

Alien gang violence is a serious problem in the United States. As my colleague Jessica Vaughan and I explained in September:

Transnational gangs are a unique and growing public safety threat in America, not only due to their members' propensity for violence and their focus on recruiting schoolchildren, but also because of their relationship with gang leaders based outside of the United States.

State and national gang threat assessments have documented an increase in transnational gang activity in recent years, particularly of those gangs associated with aliens from Central America, including MS-13 and 18thStreet. This increase has been fueled by the years-long surge in illegal arrivals of unaccompanied minors. Some gangs boosted their ranks by bringing in recruits from abroad who could take advantage of lenient policies at the border. In addition, established gang cliques in areas where many unaccompanied minors were settled targeted the new arrivals for recruitment, sometimes recruiting children as young as 10 years old.

The Center has identified 126 U.S. communities in 24 states (72 percent in suburban locations) that in the last two years have experienced a violent crime wave attributed to MS-13 and 18th Street. These two gangs are the most notorious Central American gangs, and have a large share of members who are illegal aliens. The hot spots include the Washington, D.C., suburbs, Long Island, N.Y., greater Boston, and Houston.

Among the crimes attributed to MS-13 were dozens of homicides, numerous attempted murders, arson, extortion, drug trafficking, firearms violations, rape, robbery, and witness tampering. Seventy percent of MS-13's homicide victims we tracked were under the age of 21.

The SECURE Act provides additional authorities for the Department of Homeland Security (DHS) generally, and U.S. Immigration and Customs Enforcement (ICE) in particular, they can use to respond to this growing threat. While those authorities will go a long way toward addressing this issue, some minor amendments could make those provisions even stronger.

To begin with, section 1511 of that bill amends section 101 of the Immigration and Nationality Act (INA) to add a new paragraph 101(a)(53)(A), defining the term "criminal gang". Specifically, it defines a criminal gang as:

[A]ny ongoing group, club, organization, or association, inside or outside the United States, of 2 or more persons that—

(i) has, as 1 of its primary purposes, the commission of 1 or more of the criminal offenses described in subparagraph (B) and the members of which engage, or have engaged within the past 5 years, in a continuing series of such offenses; or

(ii) has been designated as a criminal gang by the Secretary, in consultation with the Attorney General, as meeting the criteria set forth in clause (i).

This language more or less tracks section 2 of H.R. 3697, which Vaughan and I discussed in September. The criminal offenses that would support a designation are broader in the SECURE Act than in the House bill, and include "any aggravated felony", all criminal offenses "described in" sections 212 and 237 of the INA, and a broader number of drug trafficking and violent crimes. The latter provisions were likely included in the SECURE Act to address recent challenges to portions of the aggravated felony "crime of violence" provision in section 101(a)(43)(F) of the INA, and also to respond to the extraordinarily violent actions of alien gangs in the United States.

These exceptions would, as a practical matter, swallow the grounds of removability. Even the most hardcore, tattooed gang member with the most extensive rap sheet will claim that he or she has renounced gang activity when in court, akin to the hungover, morning-after alcoholic who swears he will never drink again; in my 15 years as a judge and prosecutor, I have never actually met an alien who would be removable under this standard. Nor is it clear how someone could have participated in the activities of a criminal gang (think MS-13) without knowing that those activities would "promote, further, aid, or support the illegal activity of the criminal gang."

These exceptions are not workable, either. Simply put, judges and consular officers are not mind-readers or seers — while "past performance may not guarantee future results", an alien's past performance is usually the only (and best) evidence that is available to them in determining whether to admit or remove an alien, which is why the INA generally bases removability on past acts.

Further, an alien charged with inadmissibility bears the burden of proving that he or she is "clearly and beyond doubt entitled to be admitted and is not inadmissible under section 212" of the INA. In this context, the alien could avoid removal simply by disclaiming knowledge that the gang activities further promoted the illegal activity of the gang, leaving ICE the impossible task of proving that they did. Even worse, ICE "has the burden of establishing by clear and convincing evidence that, in the case of an alien who has been admitted to the United States, the alien is deportable." This means that ICE would have to prove that an admitted alien is a gang member, knew his or her activity furthered the illegal activity of the gang, and that the alien has not renounced such gang membership. This burden would fall somewhere between "uphill battle" and "impossible task".

There is no good public policy reason for these exceptions, either. If the purpose of the grounds of removability is to dissuade aliens from joining gangs, such "get out of jail free" cards would undermine it because an alien considering gang membership would know a well-timed claim of renunciation when caught by ICE is all that is necessary to avoid repercussions. If the goal of these removal grounds is to protect the American people from aliens who pose a criminal threat (a real possibility with a gang member), these exceptions do nothing but allow the criminal alien gang member to seek mercy through contrition and repentance (real or fake) when his or her criminal acts are uncovered, and return to a life of gang crime thereafter.

Through the amendment process, these exceptions should be excised.

Unlike H.R. 3697, however, section 1511 does not bar these alien gang members from receiving temporary protected status under section 244 of the INA, special immigrant juvenile visas under section 101(a)(27)(J) of the INA, or parole under section 212(d)(5)(A) of the INA. The omission of these bars is problematic because, as my colleague Mark Krikorian has explained: "the illegal immigration of young people from Central America, facilitated and even encouraged by the Obama administration, has led to the rebirth of the vicious MS-13 gang" in the United States. These three benefits are ones that are likely to be exploited by MS-13 in an attempt to maneuver its (younger) members into this country.

These provisions were likely omitted from the gang member bars in the SECURE Act out of concerns that they would prevent aliens fleeing the gang life in their home countries from entering the United States. Given the "renunciation" exceptions in section 1511, however, that should not be a concern. Those benefits should be barred to gang members even if the renunciation exceptions were removed, however, because (1) the risk to the American people from illegal gang violence is too great to risk a false renunciation, and (2) the only aliens who would be affected are those who made a willful decision to join the gang to begin with.

Finally, section 1321 of the SECURE Act would amend the William Wilberforce Trafficking Victims Protection Reauthorization Act of 2008 to mandate that an "unaccompanied alien child" (UAC) who is a member of a criminal gang as defined in proposed section 101(a)(53) of the INA be subject to expedited removal under section 235 of the INA. Jon Feere, former legal policy analyst at the Center, explained in a July 2014 Backgrounder how that 2008 legislation had been misapplied to "a significant majority of minors" who entered the United States during that year's "surge" of UACs. This amendment will significantly address the sorts of problems in the future caused by the gang members who took advantage of that crisis.

Again, section 1511 of the SECURE Act is a solid effort to address the issue of alien-gang crime in the United States. With the appropriate amendments, it can begin to stem, and turn, that tide.