Proving what we have been saying, and what smugglers already know

My last post explained the methodology behind the "Fiscal Year 2020 Enforcement Lifecycle Report", issued by DHS on December 31 (available from DHS here and to download from the CIS site here). This post analyzes some of the statistics therein. That report shows what my colleagues and I have been saying about the ultimate results of CBP "encounters" at the Southwest border, and what smugglers already know: Detention works, and certain groups — even if they are stopped by CBP at that border — will be released from custody or never detained, and thereafter remain in the United States, usually indefinitely. These are major pull factors for illegal migration, creating a "vicious circle" of catch and release.

Findings of the Lifecycle Report

In his message accompanying that 21-page report, Acting DHS Deputy Secretary Ken Cuccinelli explains that along the Southwest border between FY 2014 and FY 2019, Border Patrol agents apprehended 2.8 million aliens, and CBP officers (CBPOs) at the ports there determined that an additional 725,000 aliens were inadmissible — more than 3.5 million CBP "encounters", all told.

By the end of March 2020, just more than 59 percent of those border encounters had been "resolved" through either removal or repatriation (51 percent, 1.8 million aliens) or an order of relief or protection (8.1 percent, or 284,000 aliens). That means that about 40 percent of the aliens encountered by CBP between FY 2014 and FY 2019 at the border are still in the United States, in an unresolved immigration status (either still in proceedings, or remaining here under — or notwithstanding — a final order of removal).

Many of those who were released, on the other hand, remain in removal proceedings, which, as the report demonstrates, can take years to complete. Of note, however, is the fact that 300,000 of the "unresolved" border encounters between FY 2014 and FY 2019 are aliens who were released or never detained by DHS, and who have been ordered removed, but remain in this country. By way of reference, that is a larger number of people than live in Pittsburgh, Pa., or St. Louis, Mo., as of 2020.

Changes in the Population of Aliens Encountered, and Outcomes

Demographic changes in the population of aliens encountered at the border in the past six years have led to diverse resolutions of those cases.

Cuccinelli notes that the period FY 2014 to FY 2019 saw an increase in the number of aliens from the so-called "Northern Triangle of Central America" (NTCA) countries of El Salvador, Guatemala, and Honduras, as well as in the number of aliens entering illegally with children (family units or FMUs) and unaccompanied alien children (UACs) entering illegally. 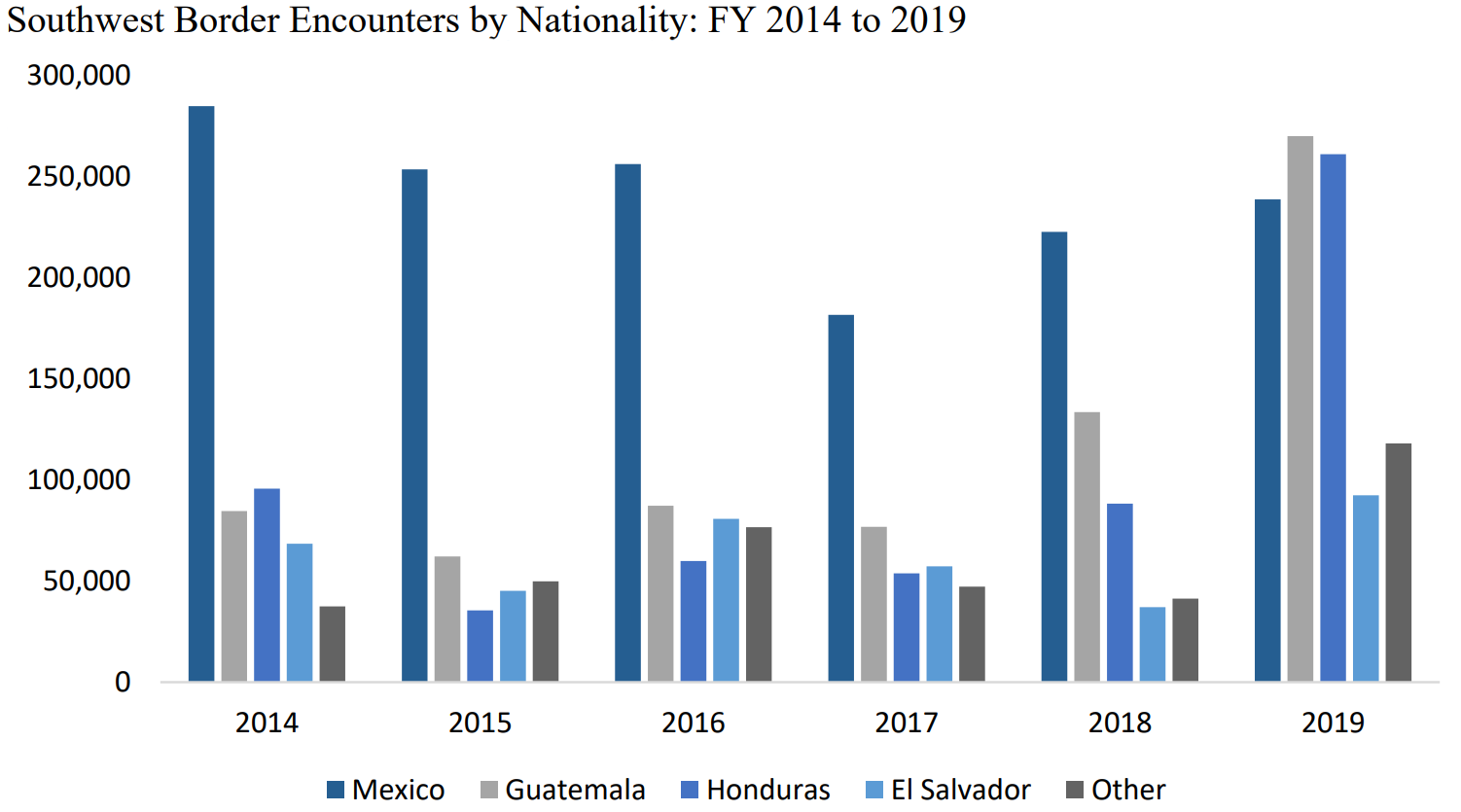 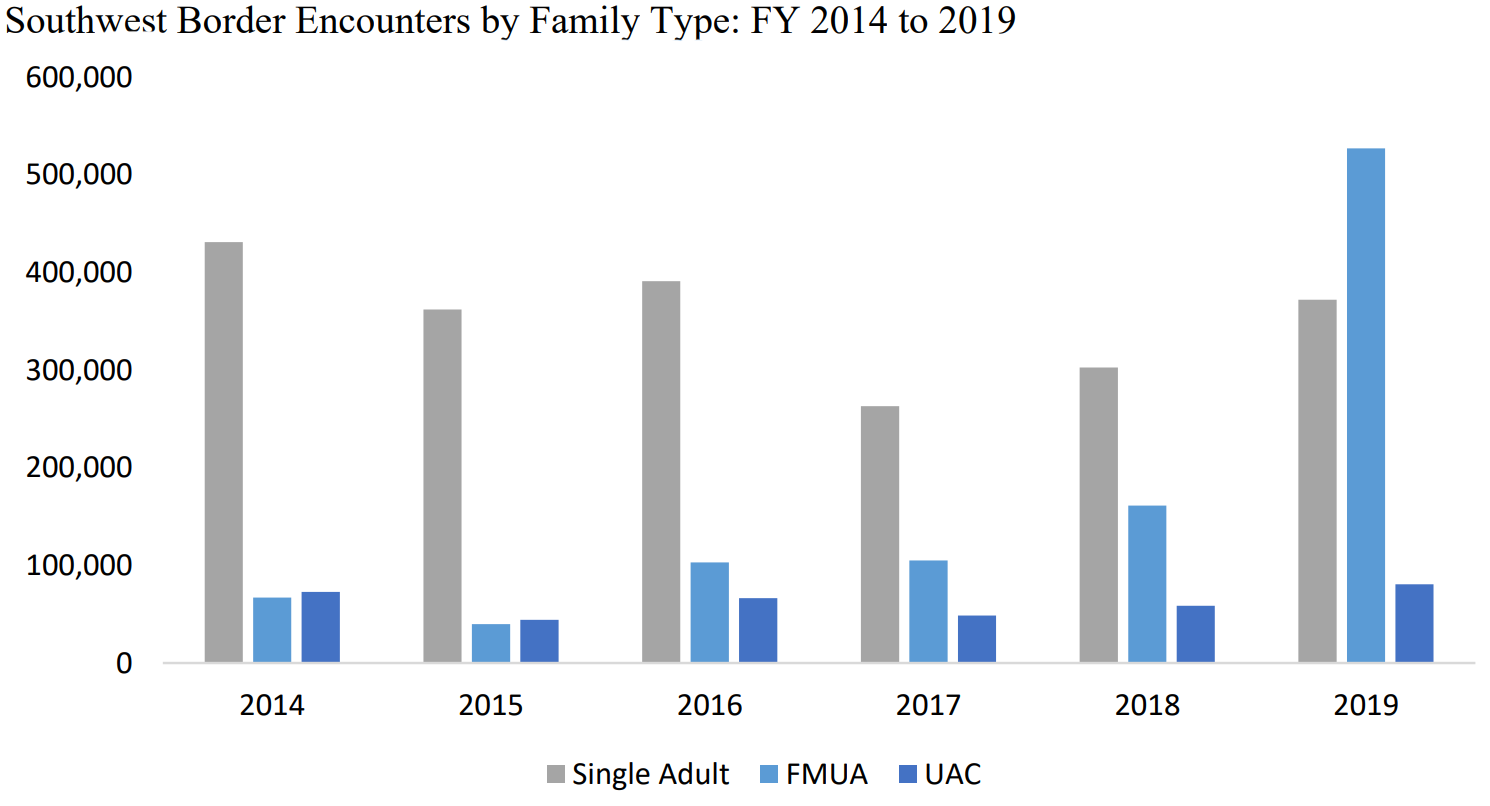 It should come as no surprise that Mexican nationals entering illegally across the Southwest border are repatriated in higher numbers than nationals of countries other than Mexico (OTMs), or that single adults are removed at a higher rate than FMUs or UACs, but the report verifies these facts. 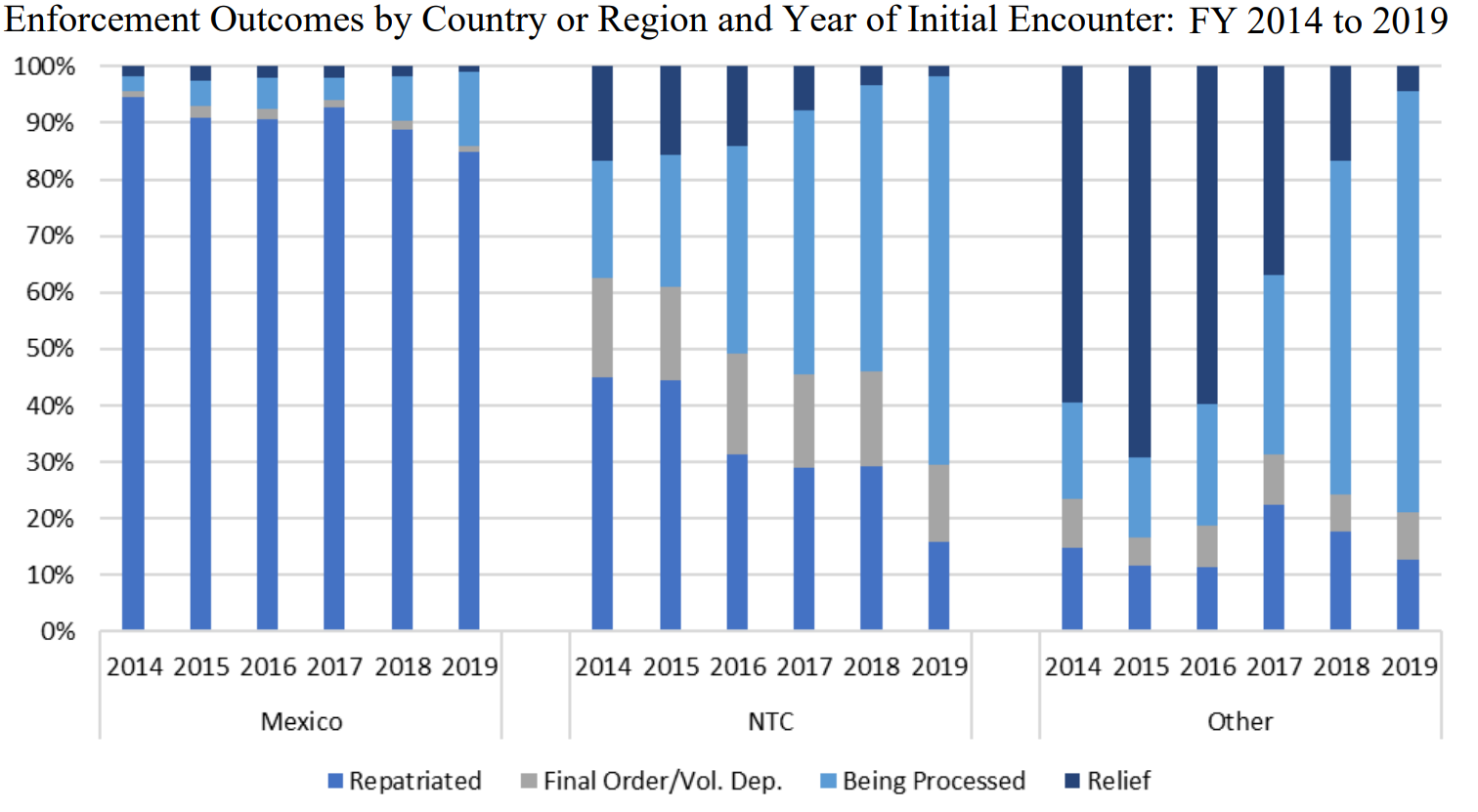 Most Mexican nationals entering illegally are doing so to work, and few have valid protection claims, and therefore are caught attempting to evade detection. If they are found to be removable by CBP during the expedited removal process, they are simply sent back across the border.

Those NTCA nationals, on the other hand, had to pay to be smuggled through Mexico (and possibly other countries as well) on their trek to the United States. They often show up with protection claims (of varying validity), and seek out the first Border Patrol agent or CBPO they can find, to turn themselves in and start the expedited removal — and credible fear — process.

We can presume, but will never dispositively know, that some, most, or all smugglers tell OTMs what to say in order to remain in this country indefinitely. We can also presume that at least some OTM migrants have been told by neighbors or family members how the credible fear process works, and how to successfully gain release into the United States. In any event, however, if you have paid a smuggler thousands of dollars (and risked any number of perils) to come to the United States, you are unlikely to simply turn around and go home once caught.

If they are subject to expedited removal, however, those NTCA nationals cannot simply be sent back across the Southwest border. The Mexican government is obligated to accept the return of its nationals, but will only accept OTMs if it agrees to. That means that the U.S. government must obtain travel documents for those OTMs, and then pay to send them home. That takes time and money.

Here are the results: Some 1.43 million Mexican nationals were encountered in the six-year period studied, of whom 1.27 million were returned to Mexico — just less than 89 percent. Of the 1.7 million NTCA nationals CBP encountered during that period, on the other hand, 472,000 have been sent home — or just more than 37 percent.

Those discrepancies are more glaring when single adults are compared to FMUs. During the period studied, 2.1 million encounters involved single adults, and one million were aliens in FMUs. Of those single adults, 1.6 million (more than 76 percent) were sent home. By contrast, only 61,000 — 6.1 percent — of the FMUs encountered were repatriated. Not that the rest have been granted relief or protection: 20 percent of the FMUs encountered during this period are under final orders of removal, but have not departed.

Interestingly, the report reveals that the number of single adults encountered at the border dropped during the period studied, while the numbers of UACs increased and of FMUs soared.

Reasons for the Demographic Shift at the Border

Cuccinelli is blunt (and correct in my opinion) in his assessment of the reasons for these increases in the number of UACs and FMUs. He explained that "illegal alien border crossings are being driven by loopholes in our immigration laws and exploited by human smugglers bringing family units and UACs to the Southwest Border."

I analyzed three of those loopholes in a May 2018 Backgrounder. They are: (1) The low "credible fear" standard, as a result of which AOs pass a majority of aliens claiming fear (73.6 percent in FY 2019) on to IJs. (2) Requirements in the William Wilberforce Trafficking Victims Protection Reauthorization Act of 2008 on DHS to transfer OTM UACs to the custody of the Department of Health and Human Services for placement with "sponsors" in the United States (most of whom are themselves here illegally). And (3) A 2016 Ninth Circuit decision in Flores v. Lynch, which requires the release within 20 days of accompanied alien minors in FMUs who are apprehended by DHS.

Given the Flores mandate, and to prevent family separation, adults travelling with those minors are usually released, as well. That, in turn, has encouraged adult migrants to bring children — including children they falsely claim to be their own (as Fox News reported in July 2018) — to the United States with them, because it increases the likelihood that they, too, will be quickly released to remain here indefinitely.

As an aside, my colleague Todd Bensman reported how this loophole has been taken to its all-too-logical extreme in May 2019. Smugglers or brokers in home countries were cutting "package deals" in which a parent provided a child (especially if the parent has more than one) to a childless migrant for a fee, or an in-kind reduction in the real parent's own smuggling fee (which could otherwise run $7,000 from the NTCA).

Reviewing the statistics in the report, I conclude that migrants and their smugglers have identified and exploited the Flores loophole, in particular.

Correlation may not imply causation, but it is difficult to find any factor other than the Flores orders that would have accounted for this marked increase.

This surge created a vicious cycle encouraging more illegal entries, because it strained CBP to the breaking point. According to a bipartisan federal panel, 40 percent of Border Patrol's resources were absorbed in responding to the FY 2019 border crisis, diverting it from its other missions. At one point, many FMUs were not even being subjected to expedited removal (let alone credible fear interviews by AOs), and agents were simply releasing those aliens with NTAs to appear at future removal proceedings.

That is likely the reason why, the report found, the percentage of fear claims as compared to total encounters actually dropped between FY 2018 and FY 2019, from 21 percent of all encounters to 12 percent. Of course, because the FY 2019 surge was so large, the real number of fear claims rose from 108,000 in FY 2018 to 115,000 the next year (which was more than 91 percent higher than in FY 2014, when only 10 percent of encounters resulted in fear claims).

That policy of releasing aliens in FMUs with an NTA, exacerbated by Flores, was the "major 'pull factor'" encouraging FMUs to enter the United States illegally, the referenced bipartisan panel found. The journey to this country, it concluded, inflicted significant trauma on those aliens, falling hardest on the children.

This simply scratches the surface of the lifecycle report. There are many more important data points therein that I have not discussed, including the fact that cases beginning with fear claims take years to resolve (36 percent of such FY 2014 encounters had not reached resolution by the end of March 2020, for example).

Or the fact that encounters in which aliens were initially detained and then released (described as "partially detained") were repatriated at a lower rate than encounters in which aliens had never been detained (3 percent vs. 30 percent) and had a higher rate of in absentia orders of removal when they failed to appear before an IJ (14 percent of the partially detained as opposed to 10 percent of the never detained). I will explain my theory for why that was true in a future post.

That said, according to the lifecycle report, Mexican nationals and single adults encountered by CBP along the Southwest border between FY 2014 and FY 2019 were much more likely to have had their cases resolved — and to have been repatriated — by March 31, 2020, than NTCA nationals and FMUs. Aliens who were encountered during that period and remained in detention were more likely to have been repatriated than aliens who were never detained, and much more likely than those who were detained and then released.