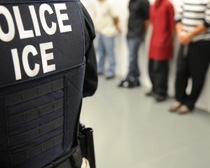 On Sunday it was revealed that nine aliens died, and several more were in "dire condition", after they were discovered in the back of a "sweltering tractor-trailer" in a Walmart parking lot in San Antonio, Texas. Seventeen of the 39 aliens rescued were reported to be in "critical condition".

At one point, it was reported, "more than 100 people" may have been packed into the truck, which was believed to have picked up its passengers on the U.S. side of the border with Mexico. According to the acting director of Immigration and Customs Enforcement, Tom Homan, "[f]our of the survivors appeared to be between 10 and 17 years old."

This is not the first such tragedy, or even the first in Texas. Early in the morning of May 14, 2003, a "milk trailer, piled with bodies" was discovered near Victoria, Texas, abandoned at a truck stop. Press reports stated that 19 died and 55 aliens were rescued in that incident; a five-year-old child was the first to succumb, and the driver eventually received a 34-year sentence for his role in that crime.

Nor was this the only incident that involved transported aliens in San Antonio this weekend. According to press reports:

15 people were detained at a home located at the 100 block of Westhaven Place on the West Side [of San Antonio] Sunday evening. Law enforcement sources tell us that those detained are believed to be human trafficking victims.

There are two important points that these cases underscore. The first is that smugglers are bad people. I am an educated man, and could use more flowery language, or more clinical terms, to make this statement, but that would be gilding a noxious lily. No evil compares to slavery, but if there were any group of individuals who would come close in their wretchedness to slavers, it would be smugglers. Their stock in trade is human flesh, and their hook is the human misery of those who are caught up in their predations. They objectify their customers, and are usually more than willing to cut and run, leaving their victims to their fates.

The second point is that smugglers are aided and abetted by well-meaning individuals in the United States. Texas Lieutenant Governor Dan Patrick placed part of the blame for the Walmart incident on so-called "sanctuary cities", stating:

Sanctuary cities entice people to believe they can come to America and Texas and live outside the law. Sanctuary cities also enable human smugglers and cartels. Today, these people paid a terrible price and demonstrate why we need a secure border and legal immigration reform so we can control who enters our country. We continue to pray for the families and friends of the victims.

This may seem to be a cruel statement to some, but in my 25-years of immigration experience, it is 100 percent true. Such laws are likely enacted with the intent to "protect" those aliens who have already entered illegally, but they also send a signal to all who foreign nationals would come to the United States illegally that this country is not serious about its immigration laws, and that once an alien enters illegally, he or she will be "home free". It is not boastful to state as an American that we have a higher standard of living, better schools, and better healthcare than most of the world, and certainly those countries from which most illegal aliens come. These are strong inducements to take dangerous risks.

The same is true of other incentives provided to those aliens who have entered illegally. In-state tuition and driver's licenses for aliens here unlawfully send the same message. And, at the end of the day, for nine people in San Antonio, and 19 in Victoria, it is at the end of the day a cruel one.

There will always be immigration laws in the United States. Our institutions and social-welfare systems would collapse without them, crime would increase, and groups and nations that are adverse to our government and people would exploit open borders to harm us and our way of life.

And, as long as we have immigration laws, there must be only one immigration policy, set by the federal government pursuant to the Constitution. States can't have a different policy, and cities can't either. Although the best argument for such a system is the rule of law, it is not the only one. Divergent policies create false hope, and encourage aliens to take the risk of placing their lives in the hands of the worst of criminals.