Father Damien — a model for all immigrants, and Americans, too 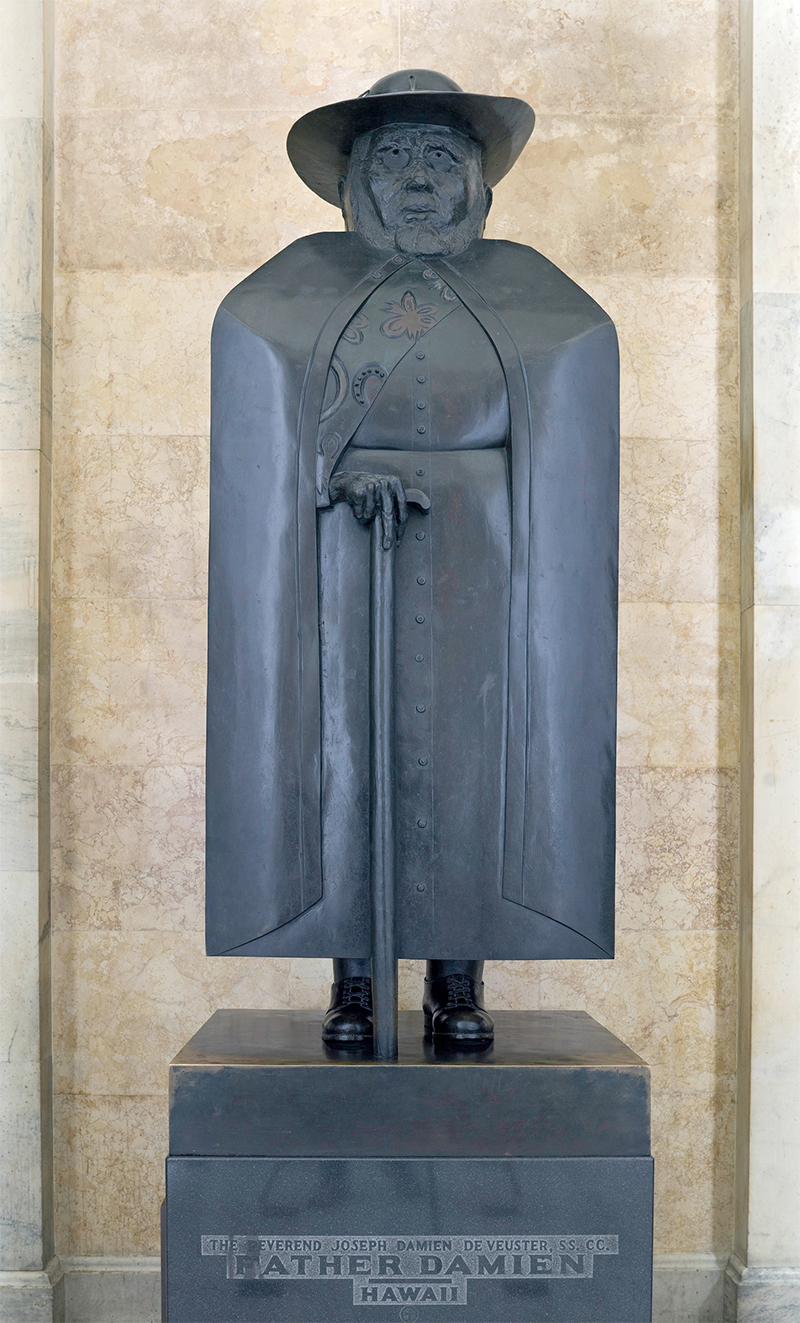 Press reports indicate that Rep. Alexandria Ocasio-Cortez (D-N.Y.) (AOC) recently complained that among Hawaii's statues in the National Statuary Hall Collection in the Capitol Hill complex is one honoring Father Damien, né Jozef de Veuster (now St. Damien of Molokai), describing it "as a representative example of 'what patriarchy and white supremacist culture looks [sic] like.'" A Belgian immigrant, Father Damien is an odd choice of target for the congresswoman from New York because he is a model immigrant — and an exemplar for all Americans, native- and foreign-born.

Note that each state is allowed by law to provide two statutes for display in the U.S. Capitol, "of deceased persons, who have been citizens thereof, and illustrious for their historic renown or for distinguished civic or military service as each State may deem worthy of this national commemoration." Hawaii chose to send statues of Father Damien and King Kamehameha I, both of which received unveilings in the Capitol Rotunda on April 15, 1969, 80 years after the priest's death.

AOC apparently believes that the Aloha State should have sent some other statue, like "Queen Lili'uokalani, the last monarch of the kingdom of Hawaii". I do not want to pile on the congresswoman's statements with other critics (including the Catholic News Agency — hardly a pro-Trump outlet), but her complaint simply makes no sense in terms of other assertions she has made.

Specifically, her house website states, with respect to diversity, that she "believes that in this country, our diversity is our greatest strength" and also that "we must build a just society to protect our communities and uplift our neighbors", including through the provision of "healthcare". The first sentiment certainly describes Father Damien, and he is the flesh-and-blood embodiment of the second.

Born the youngest of seven children in rural Belgium in January 1840, he entered the Sacred Hearts Congregation at Louvain in January 1859. A brother, also a member of the religious order, was ordered to be sent to Hawaii in 1864, but the brother became ill, and then-Brother Damien offered to go in his place. It was in Hawaii in May 1864 where he was ordained into the priesthood.

A leper colony had been established by then-King Kamehameha V on the Kalaupapa Peninsula in Molokai in 1866. The Architect of the Capitol explains that many of Father Damien's parishioners had been sent to the colony, and so he wrote to the father general of his order "that he had 'an undeniable feeling that soon I shall join them.'"

He travelled with Bishop Louis-Désiré Maigret (another immigrant and the Vicar Apostolic of the Hawaiian Islands) with a shipload of lepers to the colony in May 1873, and two days later decided to dedicate his life to them. Bishop Maigret acceded, and subsequently:

Father Damien accomplished amazing feats while residing on Molokai. Six chapels were built by 1875. He constructed a home for boys and later a home for girls. He bandaged wounds, made coffins, dug graves, heard confessions, and said Mass every morning.

Father Damien contracted the disease in 1885, but continued his work in Molokai. He succumbed to the effects of leprosy on April 15, 1889.

He was recognized by the Kingdom of Hawaii for his work during his lifetime, being named a Knight Commander of the Royal Order of Kalākaua in 1881 by then-Princess Lili'uokalani (referenced by AOC) "for his 'efforts in alleviating the distresses and mitigating the sorrows of the unfortunate.'" He learned to speak the native language in the course of his ministry.

Curiously, Father Damien as a role-model was called into question before, shortly after his death, as the New World Encyclopedia explains:

Much criticism came from the American Congregational and Presbyterian churches, who feared the influence of Catholicism (especially if Hawaii became a part of the United States). They derided Damien as a "false shepherd" who was driven by personal ambition and ego.

One Presbyterian minister in Honolulu, Reverend C.M. Hyde, described Fr. Damien as "a coarse, dirty man, head-strong and bigoted" (and those were among the nicer comments he made). This prompted Presbyterian novelist Robert Louis Stevenson (who had spent eight days in Molokai seeking out information on Father Damien after his death) to draft a lengthy response, in which he stated:

And observe: that which I saw and suffered from was a settlement purged, bettered, beautified; the new village built, the hospital and the Bishop-Home excellently arranged; the sisters, the doctor, and the missionaries, all indefatigable in their noble tasks. It was a different place when Damien came there and made his great renunciation, and slept that first night under a tree amidst his rotting brethren: alone with pestilence; and looking forward (with what courage, with what pitiful sinkings of dread, God only knows) to a lifetime of dressing sores and stumps.

It was his part, by one striking act of martyrdom, to direct all men's eyes on that distressful country. At a blow, and with the price of his life, he made the place illustrious and public. And that, if you will consider largely, was the one reform needful; pregnant of all that should succeed. It brought money; it brought (best individual addition of them all) the sisters; it brought supervision, for public opinion and public interest landed with the man at Kalawao. If ever any man brought reforms, and died to bring them, it was he. There is not a clean cup or towel in the Bishop-Home, but dirty Damien washed it.

In a passage that he could have been written yesterday to AOC, and after detailing Father Damien's shortcomings, Stevenson observed:

There are many ... who require their heroes and saints to be infallible; to these the story will be painful; not to the true lovers, patrons, and servants of mankind.

And I take it, this is a type of our division; that you are one of those who have an eye for faults and failures; that you take a pleasure to find and publish them; and that, having found them, you make haste to forget the overvailing virtues and the real success which had alone introduced them to your knowledge.

Did I mention that Gandhi was also a fan, and that in 2005, Father Damien was named De Grootste Belg (The Greatest Belgian) in a national poll in that country?

The priest was canonized by Pope Benedict XVI in October 2009. On the occasion of that event, then-President Barack Obama stated:

Fr. Damien has also earned a special place in the hearts of Hawaiians. I recall many stories from my youth about his tireless work there to care for those suffering from leprosy who had been cast out. Following in the steps of Jesus' ministry to the lepers, Fr. Damien challenged the stigmatizing effects of disease, giving voice to the voiceless and ultimately sacrificing his own life to bring dignity to so many.

I used to walk through the Hall of Columns in the Capitol on my way to work as a staffer, and the boxy nature of Fr. Damien's statue (a signature of sculptor Marisol Escobar) really stuck out from the more classical poses of honorees. As the Architect of the Capitol describes it:

The bronze statue is based on photographs taken of Father Damien near the end of his life, with the scars of his disease visible on his face and his right arm in a sling beneath his cloak. His broad-brimmed hat was traditionally worn by missionaries. His right hand holds a cane.

To be fair, the congresswoman has attempted to "clarify" her statements:

At no point did I say Fr. Damien was a bad figure - in fact, I explicitly stated that my observations weren’t about litigating his or any individual statue.

It’s about the fact that a huge supermajority of statues in the Capitol are white men. Barely any women or BIPOC. https://t.co/son0SZ2HVS

Respectfully, even her point taken in the best light to her misses the point. Think that diversity is a strength of our immigration system (a point on which AOC and I agree)? A coarse and head-strong man who comes to a new country and dedicates his life to alleviating the sufferings of the nationals of that country should be your patron saint and exhibit number one in your case.

Think that healthcare is crucial to a just society (again, a point of agreement; we likely just have different ways to get there)? Father Damien helped to create a more just society for lepers in Hawaii by providing them with healthcare and healing, and making public their sufferings, thereby exponentially improving their plight. Remember the words of Stevenson and Obama.

Every immigrant owes, at a minimum, a duty to his or her new home to become a good citizen, obey the laws, and contribute to society. The same is true, as well, for native-born citizens themselves. The exceptional immigrant is like Father Damien — selfless in identifying suffering in his new country and giving his life to alleviating it.

Yes — he was Belgian, male, and an immigrant. But, the people of Hawaii, after considering all other candidates, chose Father Damien for that greatest of honors — a statue in the United States Capitol. The Native Hawaiian Data Book shows, however, that "Caucasians" have never been a majority in the state — so it is not like they were tipping the scales in Father Damien's favor.

In fact, in 1969, when his statue was placed, Hiram Fong (R) (the son of Chinese immigrants who was the nation's first Asian-American senator) and Daniel Inouye (D) (a Japanese-American) represented Hawaii in the Senate, and Spark Masayuki Matsunaga (also a Japanese-American) was the state's sole representative.

Does AOC have a point about statues in the Capitol? I don't know; it is up to each state to decide. But if you are looking for a poster boy, make sure he is one who represents the point you are trying to make. Not the opposite.