Not a hard and fast rule, but both a statutory and discretionary consideration on a 'coveted and scarce form of relief' 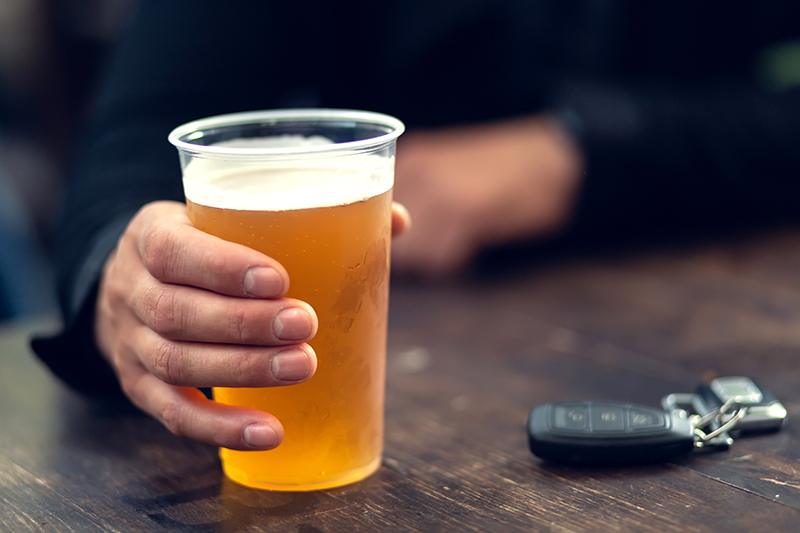 In a decision in Matter of Castillo-Perez, the attorney general (AG) held last week that multiple convictions for driving under the influence (DUI) are "strong evidence" that an alien lacked the good moral character required for cancellation of removal. He also, implicitly, suggested that immigration judges (IJs) are not all following the strict standards that Congress has set for that relief.

There are a lot of different legal points that are at issue, so in the interest of brevity, I will attempt to address them broadly.

Section 240A(b) of the Immigration and Nationality Act (INA) allows aliens who are removable from the United States to apply to have their removal cancelled and be granted green cards if they have been physically present in the United States for not less than 10 years before making that application, have a "been a person of good moral character" during that 10-year period, have not been convicted of certain criminal offenses, and show that their removal "would result in exceptional and extremely unusual hardship" to a qualifying relative. The list of qualifying relatives is limited to U.S. citizen or a lawful permanent resident (LPR) spouses, parents, and children.

This form of relief is known as "42B cancellation" (after the application's form number), and even if the alien satisfies these requirements, he or she can still be denied that relief in the exercise of discretion.

"Good moral character", on the other hand, is defined in the negative in section 101(f) of the INA, which is to say that provision generally identifies aliens who do not have good moral character. Included are habitual drunkards, those who have derived their income principally from illegal gambling activities, certain criminals, individuals who have given false testimony, aliens who have been confined as a result of convictions for 180 days or more, and aliens convicted of aggravated felonies, as well as Nazi persecutors, aliens who participated in genocide, those who have committed acts of torture or extrajudicial killings, and aliens who have committed severe violations of religious freedom.

That provision of the INA contains a "catch-all clause", as well, which states: "The fact that any person is not within any of the foregoing classes shall not preclude a finding that for other reasons such person is or was not of good moral character." [Emphasis added]

In his October 25 decision, the AG found: "Multiple DUI convictions during the relevant (10-year) period are strong evidence that an alien lacked good moral character during that time and is thus not eligible for cancellation of removal." In particular, he determined that such individuals are "likely" unable to show good moral character under the "catch-all clause" above in section 101(f) of the INA.

He supported this finding through reference to state laws and various court decisions relating to DUI, noting: "Good moral character requires adherence to the generally accepted moral conventions of the community, and criminal activity is probative of non-adherence to those conventions. ... This country has spoken clearly on the morality of DUI."

He held: "Absent substantial relevant and credible contrary evidence, multiple DUI convictions require that the immigration judge deny cancellation of removal," and "that evidence of two or more DUI convictions during the relevant period establishes a presumption that an alien lacks good moral character."

The AG also found that even absent the good-moral-character bar, aliens who have multiple convictions for DUI "would likely be denied cancellation of removal as a purely discretionary matter." In particular, he noted:

Multiple DUI convictions are a serious blemish on a person's record and reflect disregard for the safety of others and for the law. ... Given the reckless and dangerous nature of the crime of DUI and the limited number of aliens who may be granted cancellation of removal each year, aliens with multiple DUI convictions are likely undeserving of such discretionary relief.

Moreover, interestingly, the AG stated in a footnote: "Multiple DUI convictions that involve alcohol should also prompt an immigration judge to assess whether the alien is or was a 'habitual drunkard' categorically lacking good moral character under section 101(f)(1) of the INA." His reference to this fact indicates that it is not a rule of inflexible application, but is still a finding that an IJ can make in an appropriate case.

Also of interest was another point the AG made by way of background:

Cancellation of removal is a coveted and scarce form of relief. Under the INA, the Attorney General may cancel the removal of only 4,000 aliens per year. ... As the Ninth Circuit has recognized, "[i]n 1997, the first year that the quota was in effect, the limit was reached in the month of February." ... Because immigration judges continued to "reach[] the annual 4,000 limitation early in the fiscal year," they began "reserving" decisions on many applications until subsequent fiscal years, contributing to backlogs and delays in the immigration adjudication system. As a result, according to the Executive Office for Immigration Review, 3,500 cancellation of removal slots have been filled on the first day of each of the last five fiscal years. The other 500 slots are set aside to be granted to detained aliens throughout the year.

With demand for cancellation of removal well outstripping supply, immigration judges should grant such relief, in an evenhanded way, only to the most deserving candidates.

Reading between the lines, the AG appears to be giving notice to the immigration courts that they should be more circumspect in granting 42B cancellation.

Congress added 42B cancellation of removal to the INA in section 304 of the Illegal Immigration Reform and Immigrant Responsibility Act of 1996 (IIRIRA), largely replacing a similar form of relief known as "suspension of deportation". As the Congressional Research Service (CRS) has explained:

Before IIRIRA, relief could be granted to an alien who had been physically present for 7 years, who had had good moral character, and whose deportation would result in extreme hardship to the alien or to the alien's citizen or permanent resident spouse, child, or parent. Stricter standards — 10 years' presence and "exceptional and extremely unusual hardship" — existed for aliens who were deportable on certain criminal, fraud, or security grounds, while eased standards existed for certain abused spouses and children.

IIRIRA also placed the aforementioned caps on the number of aliens who could be granted 42B cancellation. Both the heightened standards and the cap reflected Congress's concern that IJs were granting suspension of deportation too freely, largely reading out the hardship provision required for that relief.

Perhaps the case that best demonstrates how loose the standards for suspension of deportation had become was the June 14, 1996, decision of the Board of Immigration Appeals (BIA) in Matter of O-J-O-.

The alien there was an unmarried 24-year-old Nicaraguan who had been denied asylum. He had no qualifying relatives, and had lived in the United States since he was 13 (arriving one month before his 14th birthday). He had completed elementary school, junior high school, and high school in this country, spoke English, and was working "as an independent hauler". According to the BIA, the respondent was "deeply involved in church activities", and was studying theology in hopes of ordination. He had "close friends in the Los Angeles area", including a legally present cousin he saw "on a daily basis", his brother's fiancée, and his own fiancée (whom he had known for three years and who was pursuing her own asylum application).

The most interesting part of the BIA's analysis was the following:

The respondent is a baseball enthusiast who attends many games each year. He also participates as a player on city league baseball and softball teams. The manager of his baseball team provided a letter praising the respondent as an athlete who has been of great value to the team and the community.

In reversing the IJ's denial of suspension of deportation, the BIA rejected the IJ's findings that the respondent "could participate in church activities and become involved in community activities, such as baseball, in Nicaragua," concluding:

The hardship related to community involvement ... derives from the loss of the personal and social bonds established during the course of such activities. We consider not only the length of residence, but also the degree of integration into American society and the strength of attachments to friends and community.

The dissent was blunt in response:

Congress deliberately used extreme language in requiring "extreme hardship." In view of the history behind the adoption of this test, the Supreme Court case law, and the administrative practice over the last 20 or more years, I see no justification for us to apply anything other than a plain meaning or narrow approach to the concept of extreme hardship.

This does not mean that relief is only available when the level of hardship becomes unbearable, or that we must be guided only by the harshest interpretations seen in past years. But we ought to be able reasonably to describe serious detriment before we can fairly characterize a set of circumstances as involving "extreme hardship." Within this overall frame of reference, I find the majority's explanation unpersuasive.

The conference report for IIRIRA explained why that legislation had (largely) replaced suspension of deportation with cancellation of removal, calling out Matter of O-J-O- for special mention:

The managers have deliberately changed the required showing of hardship from ''extreme hardship'' to ''exceptional and extremely unusual hardship'' to emphasize that the alien must provide evidence of harm to his spouse, parent, or child substantially beyond that which ordinarily would be expected to result from the alien's deportation. The ''extreme hardship'' standard has been weakened by recent administrative decisions holding that forced removal of an alien who has become ''acclimated'' to the United States would constitute a hardship sufficient to support a grant of suspension of deportation. See Matter of O–J–O-. ... Such a ruling would be inconsistent with the standard set forth in new section 240A(b)(1). Similarly, a showing that an alien's United States citizen child would fare less well in the alien's country of nationality than in the United States does not establish ''exceptional'' or ''extremely unusual'' hardship and thus would not support a grant of relief under this provision. Our immigration law and policy clearly provide that an alien parent may not derive immigration benefits through his or her child who is a United States citizen. The availability in truly exceptional cases of relief under section 240A(b)(1) must not undermine this or other fundamental immigration enforcement policies. [Emphasis added.]

Even given the backlog in cases pending before the immigration courts, it is exceptional that more than 4,000 alien respondents per year are still able to satisfy the extremely high standards for 42B cancellation. And, as the AG noted, the manner in which IJs are granting that "coveted and scarce form of relief" is itself contributing to the backlog.

Should IJs not take the AG's hint, I would expect to see him issue another decision that circumscribes what constitutes "exceptional and extremely unusual hardship" to a qualifying relative for 42B relief. In the interim, given the AG's conclusions with respect to the consequences of multiple DUI convictions in Matter of Castillo-Perez, I would anticipate that a number of pending 42B cancellation cases, that would have otherwise been granted, will be denied.