Administration policies on the border, Afghans, and Ukrainians crowd out real refugees 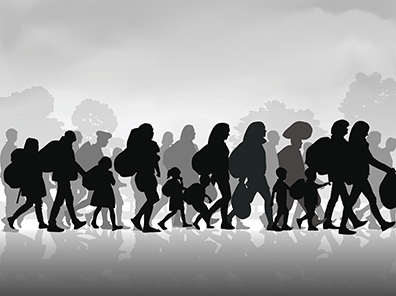 In an article and related twitter thread, the CBS News immigration reporter explained why we are seeing low refugee admissions under Biden and relayed the insights of a "top State Department official" on that matter. I’d like to address a number of affirmations made in the article.

CBS immigration reporter: The main reasons behind low refugee admissions under Biden “is the decimation of the resettlement program under Mr. Trump, whose policies led the non-governmental organizations that assist refugees integrate into American communities to close local offices and lay off staff.”

This is inaccurate. Low refugee admissions under Biden (despite high ceilings) are becoming a trend not because of Trump but because the Biden administration is choosing to prioritize other entry categories and give them the same benefits as resettled refugees.

Federal agencies’ resources are not unlimited. The border crisis and its illegal crossings, along with other new entrants in need of processing and assistance, such as Afghan and Ukrainian parolees, are overwhelming the system and diverting federal resources away from refugees in need of resettlement.

In fact, the mandate of the Office of Refugee Resettlement (ORR) keeps expanding, adding both new benefits as well as new beneficiaries. The nine resettlement agencies that are paid by the government to resettle refugees here alongside their hundreds of local affiliates are very much alive, except that they are busy providing services (including placement, support with housing, community orientation, help accessing health services, enrollment in various benefits and welfare programs, employment, etc.) to other populations. The Biden administration has admitted so far around 80,000 Afghan parolees and 100,000 Ukrainian parolees and made them (and those who will follow) eligible for the same services and benefits as resettled refugees.

If, with every crisis it faces (whether it’s the southern border, the Afghan or the Ukrainian ones), the Biden administration is choosing to create alternative pathways to expedite admissions from the countries involved – while redirecting the agencies in charge of helping resettled refugees towards assisting those thousands of new entrants – one should not be surprised if the numbers of resettled refugee admissions under Biden are (and are likely to remain) low.

Correct, the Biden administration set the FY 2023 refugee ceiling at 125,000 (similar to FY 2022’s ceiling). But, this ceiling, yet again, will not be reached, as a State Department's Bureau of Population, Refugees and Migration official told CBS:

We are going to do everything in our power to welcome as many refugees as we can this year [FY 2023], recognizing that 125,000 remains a very ambitious target and it will take some time to get there. (Emphasis added.)

So, can we expect 50,000 resettled refugees next year? And, if this administration knows that the ceiling is unattainable, why set it so high to begin with? Back in May 2022, when President Biden raised the refugee ceiling from 15,000 (set by his predecessor) to 62,500, he warned about its unattainability: “The sad truth is that we will not achieve 62,500 admissions this year [FY 2021].”

Do Biden’s refugee ceilings look more like smokescreens aimed at appeasing potential critics than they do actual roadmaps? And if refugee admissions are to remain low next year (if not as low), does this mean that the Biden administration intends to keep opening the door to new categories of people (including those who want, but do not necessarily need, to come to the United States) while continuing to overlook refugees in real need of resettlement?

CBS immigration reporter: There was a sharp increase in refugee admissions in September 2022: 5,546 refugees that month, “an 149% increase from August and the highest monthly total since 2017.”

Correct, but this is common. Almost every September as the fiscal year is coming to its end, admissions skyrocket in a last attempt to reach (or come closer to) that year's ceiling.

Well, yes. If you increase refugee admissions from its lowest number since the passage of the Refugee Act of 1980, admissions across all regions are bound to take place.

In FY 2021, only 11,411 refugees (18 percent of Biden’s announced target of 62,500) were resettled in the United States. These were the lowest refugee admissions since the passage of the Refugee Act of 1980. They are even lower than any year under Trump, including FY 2020, which saw the lowest refugee admissions during that administration (due to travel restrictions and the suspension of the worldwide refugee resettlement program following the Covid-19 pandemic).

Blaming Trump is easy. Somehow, it’ll always fall (or be whispered) into good ears. What the Biden administration needs to clarify is whether the refugee resettlement program (which acts as a lifeline for refugees with urgent needs in their country of refuge) is on their priority list. Or if they’d rather keep designing alternative pathways for other entrants while giving those non-refugees full refugee benefits.