Steps Forward - and Back - on Tax Refunds for Illegals 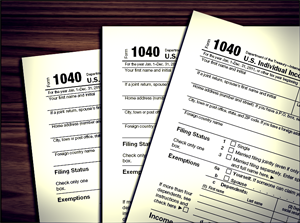 There are provisions in the administration's long, long tax proposal that relate to illegal aliens and tax refunds. Subdued rapture is the appropriate reaction.

I approach this with the following thoughts in mind:

Further, while I am reacting to one part of the proposal that I know deals with illegal aliens, there may well be others in the legislation not known to me.

The Trump administration's tax reform proposals, when examined carefully, seem to be right on the first two points, and dead wrong on the last three. (I am not enthusiastic about big tax breaks for the very rich, and the proposed abolition of the estate tax, but these are other issues.)

These thoughts came to mind after reading the following segment of HR 1, the proposed tax bill:

(a) SOCIAL SECURITY NUMBER REQUIRED TO CLAIM THE REFUNDABLE PORTION OF THE CHILD TAX CREDIT.—

(1) IN GENERAL.—Section 24(d), as amended by the preceding provisions of this Act, is amended by redesignating paragraph (5) as paragraph (4) and by adding at the end the following new paragraph:

(5) IDENTIFICATION REQUIREMENT.— '(A) IN GENERAL.—Paragraph (1) shall not apply to any taxpayer for any taxable year unless the taxpayer includes the taxpayer's social security number on the return of tax for such taxable year.

(B) JOINT RETURNS.—In the case of a joint return, the requirement of subparagraph (A) shall be treated as met if the social security number of either spouse is included on such return.

The proposal to increase the additional child tax credit (ACTC) from $1,000 to $1,600 can be found elsewhere in the bill.

Let's look at the five variables in turn:

Incidentally the adjective additional is meant to qualify the term tax credit, not the word child. There has been for decades a tax credit that cuts your taxes for having dependents, but a few years ago Congress added an additional benefit: a sum of up to $1,000 that a taxpayer can receive for a child — a bonus that comes to those who qualify even if they do not pay any net income taxes.

The existence of this credit causes many low-income families to file their 1040s very promptly each year because it gives them up to $1,000 for each child under the age of 16. The family must report $3,000 in earned income to qualify and there have been examples of people claiming that level of earned income who did not, in fact, earn that much.

I am grateful to my colleague Preston Huennekens for his assistance.