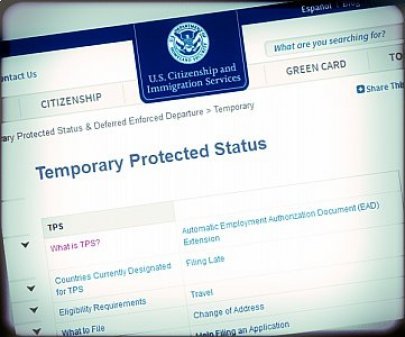 Just as the Open Borders advocates have twisted the real meaning of "family reunification", they have done the same with the concept of Temporary Protected Status. TPS is a short-term legalization of an alien population, a status that is routinely renewed year after year by executive, not congressional, action.

In each case the modification of the meaning is seemingly minor, but is not; and in each case it is meant to produce an emotional tug on behalf of the aliens involved.

Let's take an article on the new administration's immigration policy that started on the front page of the February 18 print edition of the New York Times. It says, in part: "The activists are mobilizing on behalf of separate bills that would legalize ... immigrants granted temporary status after fleeing war and natural disasters."

This does not imply, it states, that the aliens arrived after the crisis, and it implies that they were in this country because of it. Thus we are dealing with the victims of the "war or natural disasters".

Nothing could be further from the truth. TPS, which has been invoked about a dozen times, is meant to avoid deporting people back to a troubled nation, not rescuing people from that nation. It covers aliens in this country legally (on temporary visas) and illegally at the time of the crisis, not those fleeing from it.

Thus TPS aliens are not victims, they are people who never were in danger of the war or disaster; they were thousands of miles away when those events occurred. In short, they were the lucky ones, and a kindly Uncle Sam has moved not to deport them.

Let's look at the actual wording of a statement on the TPS status of Haitians, bearing in mind that the earthquake in that poverty-stricken country happened on January 12, 2010, during the Obama years. The Federal Register of January 21, 2010 stated:

In other words you had to be here on the day of the earthquake and stay here for the next nine days to be eligible.

Further the Times reporter called them "immigrants". This is not the case. An immigrant is one who is legally and permanently present in this country; the TPS people, at best, were legal nonimmigrants, such as tourists or students. Most were here illegally.

So TPS covers lucky nonimmigrants and illegals, not victims, and none were "immigrants" though the newspaper misleadingly says so.

This kind of sloppy, biased reporting can be expected to continue.