Virgil Goode represented Virginia’s 5th Congressional District in the U.S. House of Representatives 1997-2009. He served in the Virginia State Senate 1973-1996. 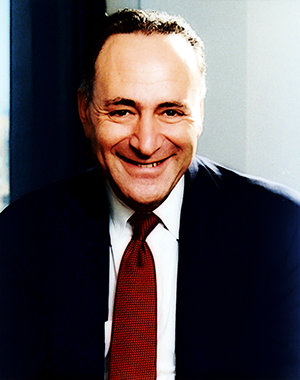 New York Democrat Sen. Charles Schumer was a member of the House of Representatives in 1986, when the Immigration Reform and Control Act (IRCA) was passed. His role at the time in enabling amnestied illegal aliens to avoid back taxes may shed light on the current Senate Gang of Eight (including Schumer) framework for "comprehensive immigration reform", which proposes that illegal immigrants would "earn" their initial amnesty status by "settling their debt to society by paying a fine and back taxes".

Congress has begun hearings on a possible amnesty deal, the centerpiece of which would be legalization of some 11 million illegal aliens residing in the United States in exchange for improvements in border security and employment verification. Skeptics of this tradeoff, including Louisiana Republican Sen. David Vitter, recall the last time such a deal was made. In a recent radio interview, Vitter argued: "This is the same old formula that we've dealt with before, including when it passed in 1986, and that is promises of enforcement and immediate amnesty." What "passed in 1986" was of course IRCA, which legalized nearly three million illegal aliens in exchange for enactment of penalties ("sanctions") against employers that hired undocumented workers.

As Vitter correctly states, the IRCA amnesty was immediate, but enforcement came later, and the same legislators and political groups who had insisted on amnesty as a trade-off for enforcement began immediately to undermine the enforcement provisions. For example, within a few years Massachusetts Democrat Sen. Ted Kennedy was spearheading an effort to repeal the employer sanctions, an effort that came to a halt only after Corretta Scott King, on behalf of the Black Leadership Forum, published a letter in opposition.

Given the prominent role assumed by Sen. Schumer in the present effort to trade a new amnesty for new enforcement provisions, it is interesting to consider his activity following enactment of IRCA, a law for which he voted as a member of the House.

Proponents of the 1986 amnesty frequently referred to illegal aliens as "undocumented taxpayers" on the grounds that their employers were withholding taxes that paid for government benefits, such as a Social Security pension, that most would never receive. The premise was implicitly endorsed by the House Judiciary Committee, whose report on IRCA stated that the "undocumented alien population" had "contributed to the United States in myriad ways, including providing their labor and tax dollars." (Report of the Committee on the Judiciary, H.R. 97-890 (Part 1), at 35. Emphasis added.)

Approximately two weeks before IRCA was enacted, Congress enacted the Tax Reform Act of 1986 (TRA), a bill for which then-Rep. Schumer also voted. The TRA represented the most fundamental change to U.S. income tax law since the Internal Revenue Code of 1954, just as IRCA was the most fundamental change to U.S. immigration law since the Immigration and Nationality Act of 1965.

Section 1234 of the TRA added section 6039E to the Internal Revenue Code. Section 6039E requires any alien applying for lawful permanent residence to provide information on whether he or she was required to file a federal income tax return for the "most recent three taxable years". The agency that collected this information (at that time the Immigration and Naturalization Service, or INS) was required to forward this information to the IRS. Since the IRCA amnesty applied only to aliens who had arrived more than four years before its effective date, virtually every illegal alien applying for permanent residence under IRCA would have been subject to U.S. tax filing obligations for the "most recent three taxable years". IRCA did nothing to relieve illegal aliens who qualified for amnesty from their obligations to file federal income returns and pay "back taxes".

On January 28, 1987, then-Rep. Schumer wrote a letter to the Secretary of the Treasury, urging the government "immediately" to issue a regulation declaring that illegal aliens applying for permanent residence pursuant to IRCA were exempt from section 6039E. Schumer argued that Congress "did not intend" that illegal aliens amnestied by IRCA would be subject to the tax disclosure requirements that Congress had enacted two weeks earlier. According to Schumer: "Obviously, we could not have a successful legalization program if by submitting an application an alien became vulnerable to an enforcement action by the IRS."

The IRS declined to issue the regulation, but in the end Rep. Schumer's objective was achieved. On November 10, 1988, Congress enacted 499 pages of tax legislation entitled the Technical and Miscellaneous Revenue Act of 1988. Tucked into page 187 was a one-sentence provision (Pub. L. No. 100-647, § 1012(o)) that barred the INS from sharing with the IRS any tax information that IRCA amnesty applicants submitted pursuant to section 6039E, rendering the submission irrelevant.

Today's proponents of mass amnesty, like those a quarter-century before, are promising that illegal aliens will have to jump through many hoops, including payment of "fines" and "back taxes", in order to qualify for amnesty. In assessing the value of those promises, one should not forget then-Rep. Schumer's behind-the-scenes maneuvers to obtain a de facto "tax amnesty" for the millions of "undocumented taxpayers" who were legalized under IRCA.