A sharp decrease in FY 2017 refugee admissions under President Trump compared to those under the Obama administration has been reported recently (see here and here). The drop could easily be interpreted as a sign of policy change and tougher screening measures brought about by Obama's successor. But the numbers are not quite as telling. 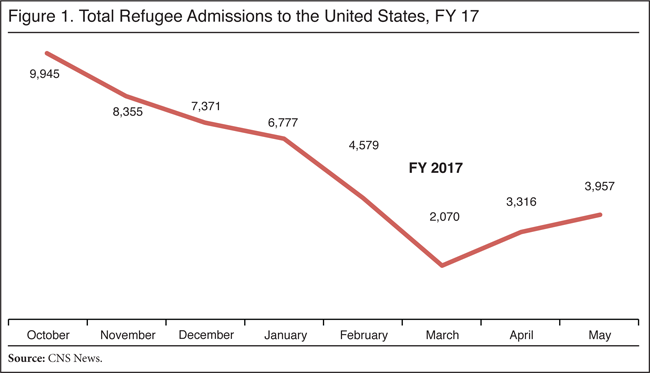 The decline is obvious, but the curve is misleading.

The number of refugees admitted in the last months of the Obama presidency (October 2016 to January 2017) is not representative of the Obama era. Before leaving office, President Obama wanted to admit as many refugees as possible (and he did). Those admissions, also, came following the Leaders' Summit on Refugees he hosted in New York in September 2016. During the summit, Obama urged world leaders to follow the United States in mobilizing resources for the refugee cause and committing to more resettlement.

We should, therefore, not be surprised if the first months of FY 2017 show higher number of refugee admissions — higher than those admitted under the Trump administration, but also previously under the "regular" Obama era.

To get to a better reading of this chart, we need to go back to the numbers admitted under Obama during the first months of the previous fiscal year (2016). Here's what we get: 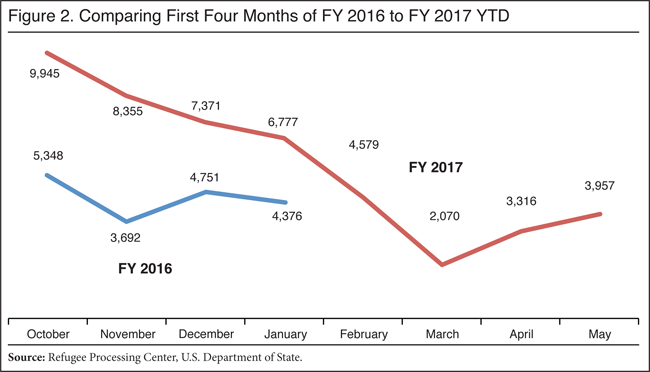 As you can see, the curve is still downward, but the slide is not as dramatic.

The average monthly admission of the first four months of FY 2016 (October, November, December, and most of January) under President Obama was 4,541.

Under President Trump, the monthly average is 3,480.

That's not a huge difference.

Note also the exceptionally low number of entries in March 2017 (2,070) that followed the revised executive order "Protecting the Nation from Foreign Terrorist Entry into the U.S.", signed by President Trump on March 6 and expected to be enforced. If we disregard this low figure, the monthly average admission under Trump reaches 3,950 (even closer to Obama's 4,541).

Admission numbers fell under Trump mainly because of a general confusion that resulted from the release and then the halt of the president's two executive orders (the first one, "Protecting the Nation From Foreign Terrorist Entry Into the United States", was signed on January 27, 2017; the second, mentioned above, was signed on March 6 ).

Resettlement agencies were reluctant to move ahead with refugee processes because they weren't sure they could get refugees in.

The courts have been key to preventing the enforcement of President Trump's hasty and harmful executive order which resulted in chaos and confusion across the country and has also left thousands of refugees in harm's way. Despite the courts' repeated rejection of the administration's executive orders, refugee admissions have slowed at a time when refugee numbers around the world are at record levels. There are approximately 60,000 people who have been cleared for entry to the United States and are in limbo.

Going back to the admission numbers under Trump, if the March numbers were the lowest, those in May were the highest. The Migration Policy Institute explains why:

When Congress included budget constraints in a temporary spending measure in fall 2016, the State Department introduced weekly quotas on refugee admissions, which it then lifted in May 2017 when lawmakers passed a bill to fund the government through FY 2017. Without the weekly quotas, the admission numbers are likely to increase.

According to a State Department spokesman speaking anonymously to the New York Times, "the department had consulted the Department of Justice about its refugee quotas and had decided to adjust them." Refugee advocates applauded the State Department's decision, but were worried the reprieve could be temporary. They were also disturbed by a perceived slowdown in refugee security screenings by the Department of Homeland Security.

Whether temporary or not, budget or security-related, definite conclusions cannot be drawn today from the decreasing number of refugee admissions under the Trump administration.

Most (30,017), it comes as no surprise, were admitted under the Obama administration.

But the real question is: What's next? Is the admission ceiling for this fiscal year (which ends September 30) 50,000 — a target set by President Trump in his executive order? This would leave room for only 1,389 more refugees (including those we are expecting from Australia's offshore detention centers).

Or is it more? We are left to speculate, but we can safely say it realistically cannot be 110,000 (President Obama's projected number).

As we monitor future arrivals, let us not read too much into the drop in refugee admissions that followed President Trump's access to power. Beyond the existing confusion, a clear refugee policy (and admission numbers) is yet to be determined.