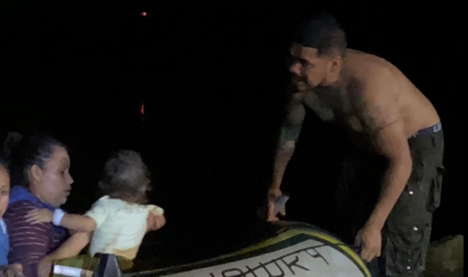 A cartel smuggler standing on Texas territory offloading his cargo of women and children under the watchful gaze of National Guard troops and visiting Border Patrol agents in Roma, Texas. Photo by Todd Bensman.

But with another raft about to land, the occupied Border Patrol supervisory agent on scene asked a Texas Department of Public Safety (DPS) officer to please go over and bring those immigrants in for processing, but to do so with this proviso:

“Don’t arrest him,” the supervisor warned about the raft’s paddler, who would soon stand on U.S. soil within arm’s reach of the DPS officer to land the immigrants.

The DPS officer explained to CIS that all federal agents on the river operate under this arrest stand-down nowadays. Part of the reason is political, a policy out of President Biden’s Department of Homeland Security that most immigrant families and children must be let in, rather than blocked, detained, prosecuted, or deported.

“They know [federal prosecutors] won’t prosecute; they’ll let them go,” the state officer explained as he walked toward the arriving raft. “Then, he’ll [the boat smuggler] just be right back. The Border Patrol agents won’t do it because they have no backing, none whatsoever. So there’s no use.”

Standing Down on Criminal Activity

Surely, one of the most unusual yet least-reported or publicly discussed aspects of the current mass-migration crisis is that law enforcement officers do not arrest the raft coyote smugglers anymore, even when they’re just feet away. As a result of this hands-off truce, those smugglers now freely and fearlessly do their work right in front of agents who, as CIS has extensively reported, feel they are under orders to act more like Walmart greeters than law enforcers.

The attitude and practice apparently pervades long stretches of the Rio Grande in South Texas. This is the epicenter where illegally entering families and unaccompanied minors brought by cartel smugglers have found welcome in unlimited numbers and quick legalization ever since the Biden administration declared that doing otherwise violated America’s humanitarian values.

Cartel smuggling groups now essentially hand off these illegal aliens to Border Patrol reception cadres that will then do the administrative paperwork for quick release, as CIS has reported. In this unusual ceasefire, those who were once natural predator and prey connect in a once-embattled no-man’s land with a new mutual objective: keeping the pipeline full and moving human cargo northward into the American interior.

So established is this non-belligerence arrangement that cops and smugglers often banter with one another across the water or at the Texas shore about the weather, or how long the boats might be running tonight. Scenes play out where Border Patrol agents simply watch from five or six feet away as smugglers stand on the Texas riverbank or in shallow Rio Grande waters helping their illegal-alien customers out of boats.

The rafters know they’re immune from arrest or trouble, so they go back for more in repeated round trips that can go all day and all night. Officers and agents just point the immigrants toward mobile processing stations as the boats keep bringing more in.

Only a short time ago, those same raft smugglers knew they risked freedom and profits if the agents could lay a hand on them. Alien smuggling is a serious enough federal crime that these cartel workers had to move carefully, shifting on a moment’s notice from cop hot-spots to other crossing areas, where maybe no law enforcement officers lurked. Making sure that smugglers were worried about capture and nervously held back cargoes until a better, less risky time did not stop this flow, but certainly slowed it.

Losing their ability to happily paddle back and forth at the most ideal locations without fear of law enforcement would almost certainly reduce the uninhibited flood of illegal immigrant families to a comparative trickle.

CBP agents are in a kind of culture shock knowing all of this. Some admit they are deeply unhappy about abdicating basic border control duty for which they signed up and trained. One knowledgeable U.S. Customs and Border Protection employee, in disgust, characterized the arrest stand-down policy this way: “We have ceded the entire battle to the cartels, just given up.”

But What About the State of Texas and National Guard?

As CIS recently reported, Texas has doubled the number of state police in southern Texas from 500 to 1,000 and also activated the National Guard. The state is expanding DPS’s “Operation Lone Star” upriver to the Del Rio and El Paso sectors now, too.

National Guard troops are not legally able to arrest anyone on U.S. territory, of course. Texas DPS troopers, on the other hand, can arrest the raft smugglers, but are given to understand that they should not. The state’s penal code would accommodate state prosecution of a third-degree felony for smuggling illegal aliens by means of “watercraft”, and a second-degree felony “if the smuggled individual is a child younger than 18 years of age at the time of the offense.” There are plenty of those.

DPS leaders say that on the river itself they have historically deferred arrest and prosecution to Border Patrol or other federal agencies, even though the state also has some jurisdiction.

But there are other reasonable rationales for why DPS has not yet aggressively stepped up to start arresting raft smugglers, despite the fact that such an initiative might prove to be a game-changer in lowering the rate of family illegal entries.

DPS Director Steve McCraw told CIS that troopers are told to hold back out of wariness that arrest attempts at water’s edge might put women and children at risk in some scenarios, given their proximity to sociopathic cartel operatives.

That’s especially been the case since DPS officers saved a six-month-old infant girl on March 16 when the officers got too close to a raft smuggler, who then threw her into the Rio Grande, officials say.

Trying to arrest these rafters might provoke some of them to throw other children into the river to distract arresting officers, Director McCraw said.

“They’ll throw them in the water,” he said. “And if that happens, we’re going to save them first. That’s going to be the first thing we do, and they know that and leverage that.”

“We’re not going to put women and children at risk.”

Still, McCraw did not entirely rule out having his officers go after the boat smugglers on state charges.

That has yet to happen but certainly is not outside routine law enforcement activity. For instance, in cities across America, officers are well trained to handle domestic violence cases and routinely arrest suspects in the presence of the women and children they seek to protect.

“If we are able to get our hands on them, we will ... when it’s tactically sound,” McCraw said.