Immigration Affects the Issues Most Important to Voters 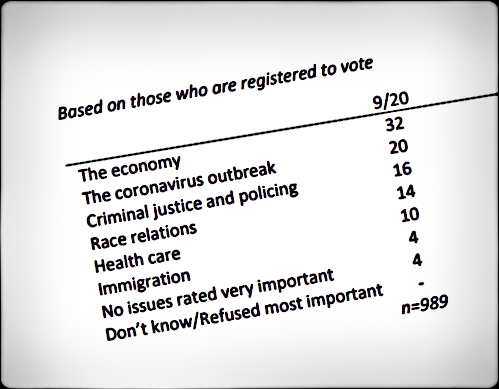 With the 2020 presidential election weeks away, the country is faced with two choices as it relates to immigration: President Trump's ongoing policies, and the proposals of former Vice President Joe Biden. Suffice it to say that they are wildly divergent. In my next post, I will compare and contrast the two candidates' positions, but to frame that, it is important to understand what matters to voters as they head to the polls — and why immigration, which is not at the top of their list, should be.

Immigration was a key issue for voters not just in the 2016 general election, but also in the run-up to the 2018 midterms. Given the shocks that our nation has faced (and continues to deal with) — particularly since March, when the Wuhan coronavirus pandemic was declared — immigration has slipped in the public mind, however. A September 10 Health Tracking Poll from KFF lists "immigration" as the sixth most important issue to registered voters, with just 4 percent stating that it is the "most important" in deciding for whom they would vote as president.

Specifically, "immigration" as an issue is behind "the economy" (32 percent), "the coronavirus outbreak" (20 percent), "criminal justice and policing" (16 percent), "race relations" (14 percent), and "healthcare" (10 percent). With the possible exception of "race relations" (which could refer to any number of concerns), each of these touches on, and is affected by, immigration.

Harry Truman famously quipped: "Give me a one-handed economist. All my economists say 'on hand...', then 'but on the other… .'" That is likely truer as relates to the economics of immigration than it is to any other subject.

An entire cottage industry has arisen on this point, arguing on the one hand that immigration generally boosts the economy, and on the other hand (primarily but not exclusively from the Center for Immigration Studies), that the net loss to the public fisc resulting from a large pool of illegal unskilled immigrants overwhelms any economic benefit that they provide.

I hazard to assume what those registered voters meant when they told KFF that "the economy" was their most important issue, but I certainly have an (educated) guess. I seriously doubt that they were worried about the public debt, or about what GDP would look like in FY 2030. Instead, they were likely concerned about the state of their own economic affairs in the immediate future.

The effects of the pandemic have been asymmetrical as they relate to workers in the United States. Law firms and banks have not been immune to layoffs, and even financial giant Goldman Sachs announced on Wednesday that it is cutting 1 percent of its workforce. As Business Insider explained in August, however:

Less-educated workers and employees in lower-wage industries and occupations historically have found themselves in far more precarious economic circumstances, as have workers of color, but those trends have been exacerbated in the current crisis, with those groups facing even more dire employment situations than their more-educated, higher-wage, and white peers.

That article and an accompanying chart explain that unemployment rates are the highest for those without a high-school diploma, while unemployment for "workers without any college experience remain[s] around their Great Recession-era highs".

My colleague Steven Camarota reported in February 2017 that 54 percent of adult aliens who had entered illegally or who had overstayed nonimmigrant visas have not completed high school, and a further 25 percent have only a high school degree, placing them in direct competition with those American workers (citizens and legal immigrants) who have suffered the most from the pandemic downturn in the economy.

What about legal immigrants? My colleague Jessica Vaughan explained in 2017 that in the preceding 35 years, 61 percent of all legal immigrants entered through "chain migration", that is, they were sponsored for a visa by a family member. For those individuals, there are no skill or educational requirements, meaning that there is no guarantee that they will have even a high school diploma, or any skills that would allow them to take any job other than at the entry level. They could (and in many cases likely would) be in direct competition with those workers who are currently struggling.

With that in mind, consider that the George W. Bush Center (which promotes immigration and contends that immigration is a "net plus"), admits:

Research suggests that previous immigrants suffer more of the adverse wage effects than do natives. Prior immigrants are more like current immigrants.

Who are those "complementary workers" whose wages are raised? The George W. Bush Center provides, by way of example, four groups: "construction supervisors, translators, pharmaceutical reps, [and] immigration lawyers." Good for them, but hardly those most affected.

The Coronavirus Outbreak and Healthcare

Diseases do not respect borders, and the coronavirus is no different. As the CDC explained in June:

I am by no means blaming the victims of this illness, but it is clear from this passage that before community transmission occurred in the United States, the Wuhan coronavirus was brought to this country by those who had contracted the illness abroad.

In response, on January 31, the White House announced a ban, with limited exceptions, on the admission of those who had been in the People's Republic of China (including Hong Kong and Macau) in the 14-day period before their attempted entry into the United States. Even one critic of the administration's subsequent response to the pandemic admitted that: "The travel ban with China made a difference."

On March 11, the president followed with a similar travel ban on those travelling from the "Schengen Zone" in Europe. Dr. Anthony Fauci, director the National Institute of Allergy and Infectious Diseases, gave "a firm yes" when asked by Congress whether this ban would result in a significant impact on reducing community spread of the coronavirus in the United States. He explained:

[I]f you look at the numbers it's very clear that 70 percent of new infections in [the] world are coming from that region, from Europe. ... Of the 35 or more states that have infections, 30 of them now, most recently, have gotten them from a travel related case from that region.

The CDC similarly barred the introduction of aliens entering the United States illegally between the ports of entry along the border, or without proper documents at those ports of entry, as I explained in-depth in May. On March 20, the White House announced that it had reached a "mutual agreement" with Mexico and Canada to restrict all "non-essential travel" across our respective borders with each in response to the Wuhan coronavirus pandemic.

The purpose of these restrictions is two-fold. One, of course, as Dr. Fauci alluded to, is to prevent infected foreign nationals from entering the United States and spreading the coronavirus further. The second is to preserve limited medical resources for those already in the United States who may become ill.

That said, however, these restrictions have received insignificant notice among American voters (except from those who criticize the administration's response generally), likely because they were effective and because few pay attention to risks that never came to fruition. You may briefly curse the reckless driver who doesn't hit you, but near misses are usually quickly forgotten.

This, again, is an ambiguous concern, and one that can mean many things to many different people. That said, most people in our society want less crime, not more, and want an efficient, effective, and just crime strategy.

Legal immigrants should have a lower level of criminality (and likely do) because they are prescreened for criminal history before they are admitted to the United States. That said, as a judge, I heard cases from hundreds of green card holders who were removable because they had committed crimes in the United States, so the system is not foolproof.

One note on those drug offenses: Having spent almost three decades in and around law-enforcement, users often (if not usually) commit other offenses (such as robbery and car burglaries) in order to get the money to pay for illegal narcotics. The victims of drug abuse are not solely the abusers themselves.

And it is beyond cavil that use of illicit narcotics makes the user a hazard on America's roads. In 2018, according to the National Survey on Drug Use and Health, 12.6 million people in this country drove under the influence of illicit drugs.

Why is recidivism so high among criminal aliens if criminality is a basis for removal? I could give you some ideas, but the prevalence of so-called "sanctuary policies", pursuant to which states and localities refuse to cooperate with ICE and/or honor ICE detainers, is plainly a significant factor. But, those policies protect only criminal aliens. So why do such policies exist?

Because of support from immigrants' groups who oppose any immigration enforcement, and a misunderstanding of those policies — including and especially by the politicians themselves who set those policies. Trust me on that latter point — I have appeared before them, and their ignorance on the issue is breathtaking.

Again, this is a factor that is subject to as many definitions as there persons who have an opinion. And it is one on which I have only limited insight.

That said, however, one major factor that differentiates Americans by race is employment. According to the Bureau of Labor Statistics (BLS), in the third quarter of FY 2020, the overall unemployment rate in the United States was 8.9 percent, an increase over the same period in FY 2019 (when it was 3.7 percent) due to the shutdowns caused by the coronavirus pandemic.

What do these figures have to do with immigration? A lot, as it turns out.

Here is what civil-rights icon Barbara Jordan, who was then the Chairwoman of President Clinton's U.S. Commission on Immigration Reform, told the U.S. Senate in August 1994: "The Commission is particularly concerned about the impact of immigration on the most disadvantaged within our already resident society — inner city youth, racial and ethnic minorities, and recent immigrants who have not yet adjusted to life in the U.S."

And, as noted, it has been those who are on the lower level of the economic ladder who have been the most adversely affected by the downturn. In 1995, Jordan explained to the U.S. House of Representatives: "Immigrants with relatively low education and skills may compete for jobs and public services with the most vulnerable of Americans, particularly those who are unemployed or underemployed."

The current pandemic will end at some point, and the damage that it has wreaked on the American economy will have to be repaired. Immigration policy, as the foregoing shows, will be key to ensuring that those American workers referenced by Jordan — "inner city youth, racial and ethnic minorities, and recent immigrants who have not yet adjusted to life in the U.S." — are not only able to able to rebuild their lives and livelihoods, but are able to achieve even higher levels of economic success.

Now is the time to have that discussion, and yet if immigration was mentioned in the last presidential debate, I never heard it.

The United States faces many challenges, but it is not the first time, and will unlikely be the last. Many if not all of those challenges are affected (to one degree or another) by our nation's immigration policies. With less than a month before the general election, now is the time to examine — and debate — those policies, if we are ever to get back to any semblance of "normal".

Voters should be paying attention now, because on November 4, it will be too late.