Analysis of the Supplemental Budget Request 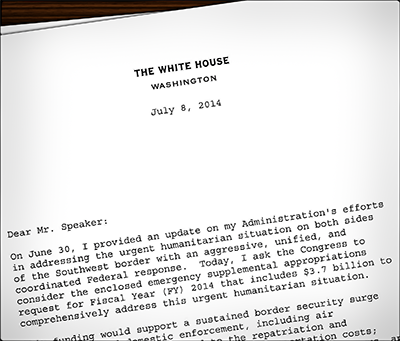 On July 8, the White House submitted its emergency budget request to the House of Representatives (which holds the "power of the purse" under our Constitution) to deal with the "humanitarian crisis" on our southern border.

The budget request, which totals $3.7 billion, immediately drew flack from many representatives who called it a blank check. Responding in the media, White House Director of the Domestic Policy Council Cecilia Munoz said that Congress cannot have it both ways: criticizing the administration while withholding the funding to effectively handle the crisis.

Having studied the request, it seems clear to me that it is the White House that wants it both ways.

In this regard, it is noteworthy that Department of Homeland Security (DHS) Secretary Jeh Johnson, when interviewed July 6 on NBC's "Meet the Press", repeatedly demurred when pressed by frustrated host David Gregory to say whether or not all — or indeed any — of the unaccompanied alien children (UACs) would ever be returned.

Johnson did say that, "With regards to adults who are bringing their children, we're bringing on additional detention capacity. We're turning that population of people around quicker." But nothing in either the specifics of the budget request, or what fragmentary statistical information the government has released about adults who have arrived as a part of the surge, shows even that statement to be true.

While administration leaders publicly claim they are working to effectively stem the tide of arrivals and ensure their speedy removal, everything about the budget request suggests this is more about resettlement, prolonging removal proceedings into infinity, and then quietly letting the tens of thousands of most recent arrivals recede into the woodwork of society to join the more than 840,000 aliens who are already fugitives from immigration courts around the country.

Reciting the entire litany of questionable items that pop out at me when I read the request is beyond the boundaries of a blog. But here are a few of the things that garnered my attention and concern:

So the government takes a hands-off approach to the UACs being smuggled, and after a few days of detention and make-work processing, passes them over to the ones who initiated the venture; it then takes a hands-off approach to the people who want to take possession of the ready-for-release smuggled UACs and families (even if those people are themselves illegal aliens). It's a closed circle of illogic. Little will come of any anti-smuggling program, except to permit the secretary to say he's fulfilling his 14-point plan. Perhaps that is why the administration isn't spending much more than chump change on the effort.

It's no wonder that many in Congress are balking at being asked to go along with such a Potemkin village approach to the problem, one that the White House saddled itself with by reason of its fecklessness where respect for the rule of immigration law is concerned.